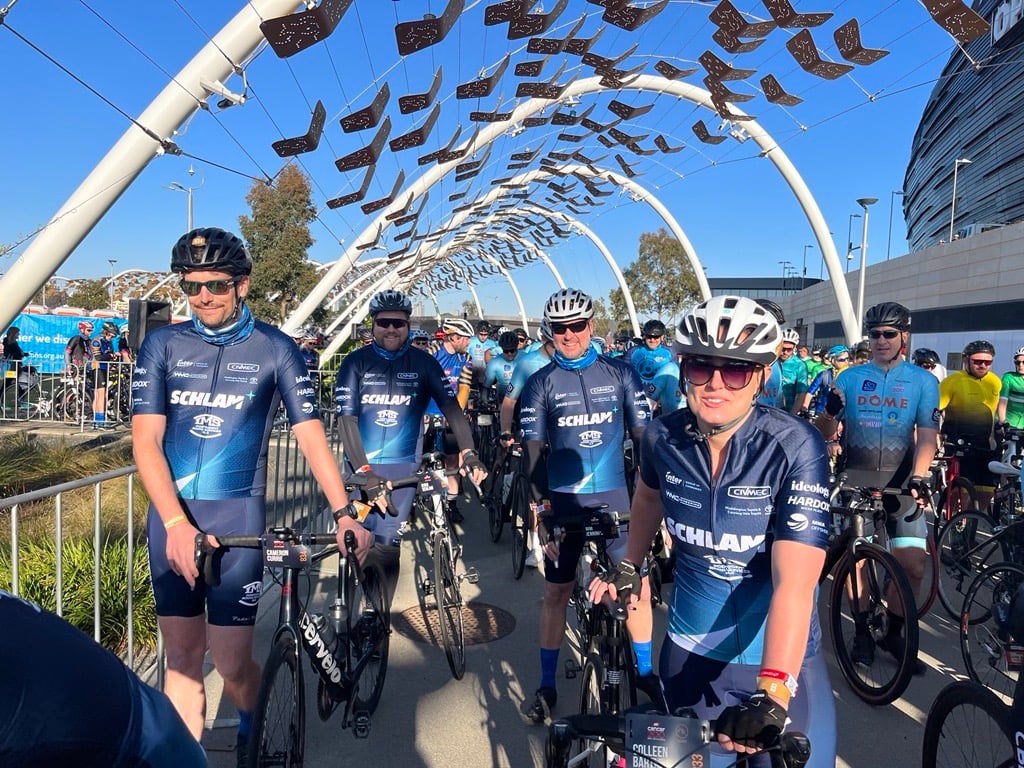 The MACA CANCER 200 RIDE FOR RESEARCH took place on 15th and 16th October 2022, with six of Schlam's dedicated cycling enthusiast's taking on the challenge. Given how incredible this cause is, how could we not snap up the opportunity to talk about it some more?

For most, this ride would be incredibly daunting, riding 200kms would be enough to turn anyone off but once you learn the reason behind it and the mission HARRY PERKINS INSTITUTE OF MEDICAL RESEARCH is pushing, it's a no brainer when you consider the number of people putting their bodies on the line every day, to fight off the big "C".

The ride started off at Optus Stadium and before jetting off to start their journey to Mandurah, the crowd was asked an important question, which really set the tone for what was an incredible weekend.

"At the start of the race the crowd were asked to raise both hands if they or someone they knew had been affected by cancer - and everyone had both hands in the air. That was pretty sobering I have to say." Matt Thomas, CEO of Schlam Group reflected.

Whilst the weather gods were working in their favour by providing beautiful blue skies and the perfect temperature, the same could not be said for the wind and the direction it took, as this was certainly a hot topic for our riders once they returned.

"I didn't really do any preparation so I would say the biggest challenge was the mental aspect for the last 30kms on the first day when were just riding directly into a horrible headwind." Tom said.

Matt mirrored that motion and agreed the ride there was the most challenging aspect of the event.

"Heading to Mandurah was challenging - especially once the sea breeze hit us as we got closer to the end. It was a matter of keeping on pedaling and try to forget how far to go!" Matt said.

Luckily, this was a team challenge and what do teams do in moments like these? They push each other and make sure no-one is left behind!

"Being with the whole team made it a lot easier as we were able to support each other and make sure we kept pushing." Tom reflected.

Throughout the ride there were multiple pit-stops, where participants were able to take a breather, have a drink and re-coup for the remainder of the ride. Although it's fair to say that everyone would've been dreaming of that finish line.

Once the team arrived at the campsite in Mandurah, they were greeted with rows and rows of tents, alongside rows and rows of bikes - it was quite a sight to see and really put into perspective the amount of people who were taking part.

Whilst many of the participants would've been 'roughing it' in their tents and shared bathroom facilities, one of our team member's Tom, was lucky enough to win a competition, giving him access to the only 'fancy' porta-loo at the site.

"It's safe to say I would've been envied by many people there, especially my own teammates who were trying to find any excuse to be able to use it too. I feel very lucky to have won the competition!" Tom said.

Once Sunday morning came, everyone was up and rearing to get going to finish off their long journey. The ride home was quite the opposite to the day prior, with Tom commenting that the conditions were perfect!

"The ride home was great, really nice views and perfect conditions. However, I would say the highlight was getting to the finish line on both days and just seeing everyone with massive smiles on their faces for hours afterwards" Tom said.

Based on our rider's experience, this event was really well thought-out with a range of small details making a BIG impact for those who participated.

"This would have to be one of the most organized events I have ever participated in - kudos to the organizers as nothing was left to chance and nothing was too much for them to assist. The friendliness of the whole rider cohort was also amazing, having stickers with your name on your helmet made it so much easier to talk with fellow riders who were all happy to chat and encourage each other to keep going" Matt said.

Now the all-important question is.... would they do it again?

"Absolutely" Tom quickly exclaimed, followed by Matt who thought "When my butt stops hurting, I will definitely consider".

Overall, this was an incredible event! The cause was certainly the driving factor but the event organization, all of the participants and of course our amazing sponsors, made this an event we will never forget. Not to mention everyone who donated, bringing Schlam's donation to $24,947.00 and the total donation to $8,572,359.00 - what an outstanding result!

Another shoutout to our fantastic team who took part, Tom, Cameron, Matt, Colleen, Ryan and Rob, as well as our sponsors who made our ride possible - IMS our Platinum sponsor, together with SSAB, CIVMEC, MMA OFFSHORE, INTER GROUP, WMC Engineering, MADDINGTON/CANNINGVALE TOYOTA and BRAND INDEOLOGY.

We look forward to hopefully participating once again in 2023!

Globally, we lose a man to suicide every minute of every day.  Men are dying too young. It’s a problem affecting[...]
END_OF_DOCUMENT_TOKEN_TO_BE_REPLACED

WHAT COMES FIRST, WORK OR STUDY?

Choosing the right career has never been harder! The wide range of various pathways makes the important decision a[...]
END_OF_DOCUMENT_TOKEN_TO_BE_REPLACED

So, you've been asked to plan the office Christmas Party and you're stumped as to where to start? It can feel[...]
END_OF_DOCUMENT_TOKEN_TO_BE_REPLACED

WAROONA; WHERE IT ALL STARTED

Nothing can quite compare to the quick progression and evolution of the mining industry but when we reflect on[...]
END_OF_DOCUMENT_TOKEN_TO_BE_REPLACED

How Good is WA Manufacturing?
END_OF_DOCUMENT_TOKEN_TO_BE_REPLACED

A long-term client of Schlam’s recently changed their mine plan.
END_OF_DOCUMENT_TOKEN_TO_BE_REPLACED

Dawson Mine is an open-cut metallurgical coal mine operation made up of three operating pits – North, Central and South. It commenced operations in 1961 and is one of the oldest coal mining operations in.
END_OF_DOCUMENT_TOKEN_TO_BE_REPLACED

The breadth of services offered by Schlam ensures that we are able to satisfy all major mobile plant shut downs.
END_OF_DOCUMENT_TOKEN_TO_BE_REPLACED