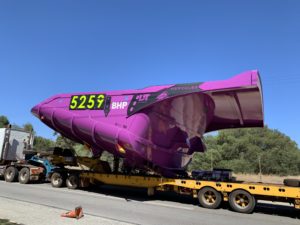 “The Hercules bodies are now being used across Four of BHP’s operations in Western Australia including Mount Whaleback, Jimblebar, Eastern Ridge, and Area C.”

While the Hercules has an excellent track record around the world, there are a couple of features that won the job for Schlam. The Original DT HiLoad Hercules is lightweight and has a higher carrying capacity over its competitors.

Mr Brearey says that the extra capacity could result in hauling up to 10 tonnes more per load for BHP.

On the back of the original deal to provide replacement trays for BHP’s fleet of Caterpillar 793 trucks, Schlam was able to secure an order for new Komatsu haul trucks for South Flank.

“Everyone has worked together to get this project over the line and continue to deliver on our promises to a great customer,” continued Mr Brearey.

“From sales who kicked this off, to engineering who came up with solutions to problems unique to this project, it has been a genuine team effort.”

With all the trays being built in Western Australia, in both Forrestfield and Waroona, the General Manager said that the manufacturing team deserved a special mention.

While local sourcing and industry-leading performance are all on the wishlist for operators around the globe, BHP also expects suppliers to join the company on its journey to deliver shared value in the area of diversity and inclusion.

Speaking at a recent industry conference, BHP’s Group Procurement Officer Sundeep Singh, said that more inclusive and diverse teams outperform other teams on safety, productivity and culture. Highlighted in this is an up to 67 per cent lower injury rate, 11 per cent better adherence to schedule, and 28 per cent lower unplanned absence.

“Our Original DT HiLoad Hercules trays have been painted in various colours recognise the diversity of the BHP workforce, including blue for men’s health, pink for women’s health, and purple in recognition of Jasper – BHP’s employee inclusion group for BHP’S lesbian, gay, bisexual, transgender and others (LGBT+) community and its allies,” said Mr Brearey.

The group’s name Jasper was inspired by the mineral jasper, known for its unique multi-coloured patterns. This characterisation reflects the rich diversity of the LGBT+ community.

BHP’s supply chain spans 60 countries, 10,000 partners with an annual spend of $20 billion across its capital and operating expenses portfolio in its 2019 financial year. It sourced 215,000 different types of material and equipment for its Australian operations alone in that year.

For over 29 years the Queensland Mining & Engineering Exhibition (QME) has been at the heart of the mining sector[...]
END_OF_DOCUMENT_TOKEN_TO_BE_REPLACED

THERE’S NEVER BEEN A BETTER TIME TO TRADE UP

Schlam announced today that it had been awarded a multi-million-dollar supply agreement with Fortescue Metals[...]
END_OF_DOCUMENT_TOKEN_TO_BE_REPLACED

In May 2022, Schlam reached the milestone of manufacturing its 1,500th Hercules dump body in Australia. The[...]
END_OF_DOCUMENT_TOKEN_TO_BE_REPLACED

How Good is WA Manufacturing?
END_OF_DOCUMENT_TOKEN_TO_BE_REPLACED

A long-term client of Schlam’s recently changed their mine plan.
END_OF_DOCUMENT_TOKEN_TO_BE_REPLACED

Dawson Mine is an open-cut metallurgical coal mine operation made up of three operating pits – North, Central and South. It commenced operations in 1961 and is one of the oldest coal mining operations in.
END_OF_DOCUMENT_TOKEN_TO_BE_REPLACED

The breadth of services offered by Schlam ensures that we are able to satisfy all major mobile plant shut downs.
END_OF_DOCUMENT_TOKEN_TO_BE_REPLACED