BURSTING TO BE A BOILERMAKER 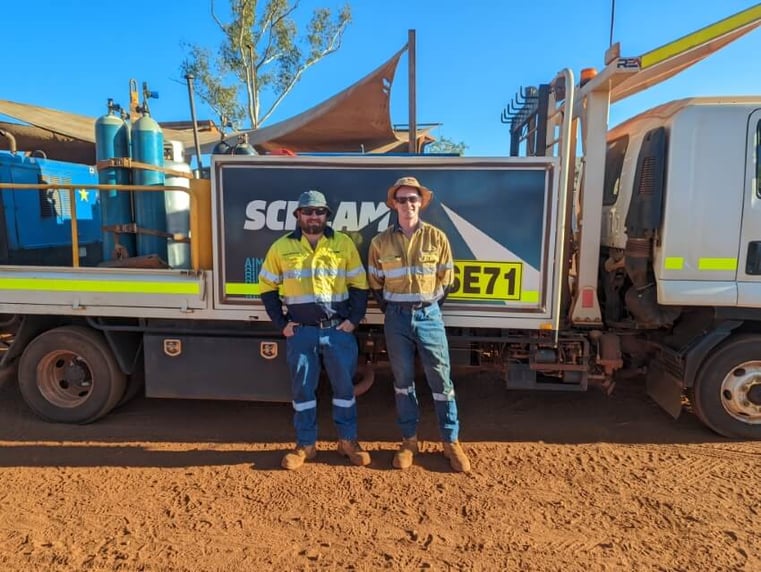 While Michael started with Schlam in March 2020 as a trades assistant, it was only last week that he began the first day of his boiler making apprenticeship.

“For me, I thought that boiler making was a versatile trade. There are lots of different potential pathways, and you can pick and choose where you might end up,” said Michael.

“I weighed up all the options and figured that once I’d put in the effort and completed my apprenticeship, then I’d never be out of a job.”

For Michael, the 'hard yards' mean a four-year apprenticeship, which can be completed in three if all goes to plan.

Michael will be starting his apprenticeship at Schlam’s branch in Tom Price, where he will be honing his skills while refurbishing trays, buckets and rotatable parts such as dog bones, EQ bars and bell cranks.

While new to the trade, Michael is not new to the industry or FIFO life, previously working as a technician and then a TA for Schlam.

“I’ve been working in the mining industry for almost four years,” said Michael.

"I enjoy the FIFO lifestyle. It's not for everyone, but it works great for me. You put in two weeks of hard work, and then you have a week completely to yourself (or whatever your swing is)."

Outside of the flexible rosters, Michael likes the industry because it attracts all different types of people and that there’s a wide variety of work, saying that you’re never really stuck in one job.

“I’m looking forward to completing my apprenticeship because having a trade means that I’m not locked down to one thing, I can move around, and I can always lean back on my skills. That might mean moving into a different mining business area, into another sector, or perhaps even into another part of the world.

"It would be great to go travelling one day, perhaps into Canada where I could work for a bit and then explore the country in my downtime. All that is possible with a trade under your belt, and I'm glad that Schlam has given me an opportunity to achieve it.

According to new modelling exploring a deepening skills shortage that has extended Australia-wide, WA's mining and resources sector could need as many as 40,000 additional workers by mid-2023.

The research, commissioned by the Chamber of Minerals and Energy WA (CME) and undertaken by independent labour market specialists Pit Crew Consulting, looks at the sector’s workforce requirements in the near term and out to 2025.

“In our sector alone, there are $140 billion of projects currently in the pipeline – opportunities that won’t be fully realised unless we can gain access to the right people with the right skills at the right time,” said Mr Everingham in a press release.

“As this report makes clear, we simply aren’t going to be able to address our workforce needs within the talent pool that is currently available in WA or, indeed, the country.”

Not getting caught up in mega-projects, Michael is happy to learn something he enjoys and be around people he likes.

“People who work for Schlam are good to work around. They are fun to be around but also focused on doing a good job. I’m excited for the next four years.

How Good is WA Manufacturing?
END_OF_DOCUMENT_TOKEN_TO_BE_REPLACED

A long-term client of Schlam’s recently changed their mine plan.
END_OF_DOCUMENT_TOKEN_TO_BE_REPLACED

Dawson Mine is an open-cut metallurgical coal mine operation made up of three operating pits – North, Central and South. It commenced operations in 1961 and is one of the oldest coal mining operations in.
END_OF_DOCUMENT_TOKEN_TO_BE_REPLACED

The breadth of services offered by Schlam ensures that we are able to satisfy all major mobile plant shut downs.
END_OF_DOCUMENT_TOKEN_TO_BE_REPLACED