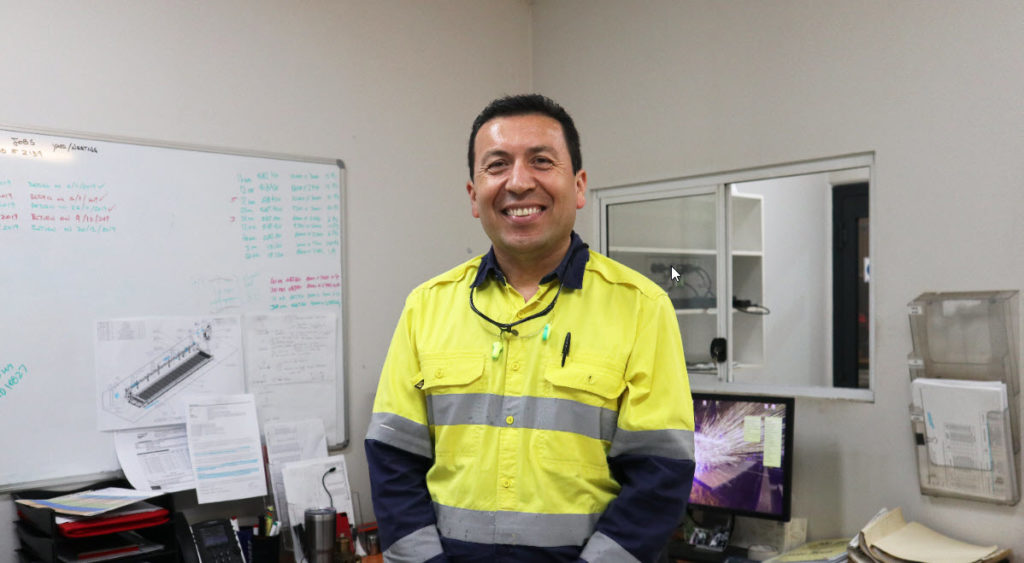 If you look up facts about Chile, you’ll find that the South American nation is home to the largest swimming pool in the world. Covering a massive 20 acres at a maximum depth of 35 metres, the pool in Algarrobo city holds an astonishing 250 million litres of water.

While not quite as big, the Original DT HiLoad Hercules truck body also originates from Chile.

Much in the same way that the company can trace its roots back to the Spanish Colony, so can our long-serving supervisor Manuel Leiva.

Hailing from Santiago, Manuel has built many Hercules dump bodies over the past 11 years. He says that he moved to WA in the boom time when the industry needed as many welders as it could find.

“I was quite happy with my job in Chile, but it was a once in a lifetime opportunity to come here, so I took it,” he said.

Manuel first started as a welder and boilermaker with the company, which was much smaller at the time with only about 25 employees.

“It was pretty much a family business back then, with the General Manager working with his wife and children here when Brandrill owned it,” recalls Manuel.

Due to the company’s relative size at the time, Manuel and his other coworkers did a bit of everything including submerged arc welding, flux core welding, painting and generally moving around the workshop doing whatever needed to be done. Manuel says that this proactive approach has been his key to success business.

“I worked in field service all around Australia and Indonesia. When we got the roller machine, I went to both Italy and Chile for training,” he said.

A few years after Manuel first started working for the company, DT Hiload was acquired as part of the $60 million acquisition of Brandrill by Ausdrill in 2009.

“Until that point, we were very dependent on Chile. We bought parts from them, and we assembled them here in Perth, much in the same way that we cut and roll parts that are then assembled on the east coast.

“Ausdrill invested in a plasma cutter, and a steel roller and our output grew from manufacturing ten to 15 bodies per year to more than 70 bodies per year; however, these were uncertain times due to shaky economy,” he said.

While DT HiLoad was a strong performer for Ausdrill, the company exited the manufacturing business, as part of its strategy to divest from non-core businesses in early 2016 when it was sold to Schlam.

As part of that deal, all employees were made redundant, but a call from Ryan Schlam on Manuel’s last day threw him a lifeline.

“I didn’t know who he was at the time, but Ryan offered me another job, which was great news as I managed to find another job without even looking for one,” he said with a laugh.

The company has changed dramatically since that time with Schlam investing heavily in research and development and making sales a priority.

Output has progressively increased, and in 2018, the company was awarded a contract to work with BHP.

As a supervisor, Manuel pushes his team to work together using the analogy of a boat.

“We have to paddle together in the same direction. It doesn’t matter if you’re the best or the worst team member, if the boat sinks, then we all do.

“I always encourage my team to have pride in what we do. For me, the Hercules is a fantastic product, and we have to maintain that reputation in everything we do,” he says.

When not working, Manuel likes kite surfing and spending time with his family. He has two children with his wife, Marcella. His youngest Diego who is just six and his oldest, Paula, who is a registered nurse and living in the UK. While it’s evident that Manuel would love for his daughter to be closer, but he’s also proud that she is off exploring the world and living her dreams, much in the same way that he has.

200KMS IN 2DAYS - ALL IN THE NAME OF CANCER RESEARCH

At Schlam, our values run deep. It is ingrained into everything we do. One of our most poignant values at our[...]
END_OF_DOCUMENT_TOKEN_TO_BE_REPLACED

This week, Manh Vo joined Schlam as People Solutions’ People and Culture Advisor. Mahn has worked in the human[...]
END_OF_DOCUMENT_TOKEN_TO_BE_REPLACED

APPRENTICESHIPS – THE ANSWER TO THE MINING INDUSTRY’S SKILLS SHORTAGE

There is no secret that the mining industry is experiencing a considerable skills shortage, and unsurprisingly,[...]
END_OF_DOCUMENT_TOKEN_TO_BE_REPLACED

How Good is WA Manufacturing?
END_OF_DOCUMENT_TOKEN_TO_BE_REPLACED

A long-term client of Schlam’s recently changed their mine plan.
END_OF_DOCUMENT_TOKEN_TO_BE_REPLACED

Dawson Mine is an open-cut metallurgical coal mine operation made up of three operating pits – North, Central and South. It commenced operations in 1961 and is one of the oldest coal mining operations in.
END_OF_DOCUMENT_TOKEN_TO_BE_REPLACED

The breadth of services offered by Schlam ensures that we are able to satisfy all major mobile plant shut downs.
END_OF_DOCUMENT_TOKEN_TO_BE_REPLACED