SCHLAM NOMINATED AS HOST EMPLOYER OF THE YEAR AT APPRENTICESHIP AWARDS 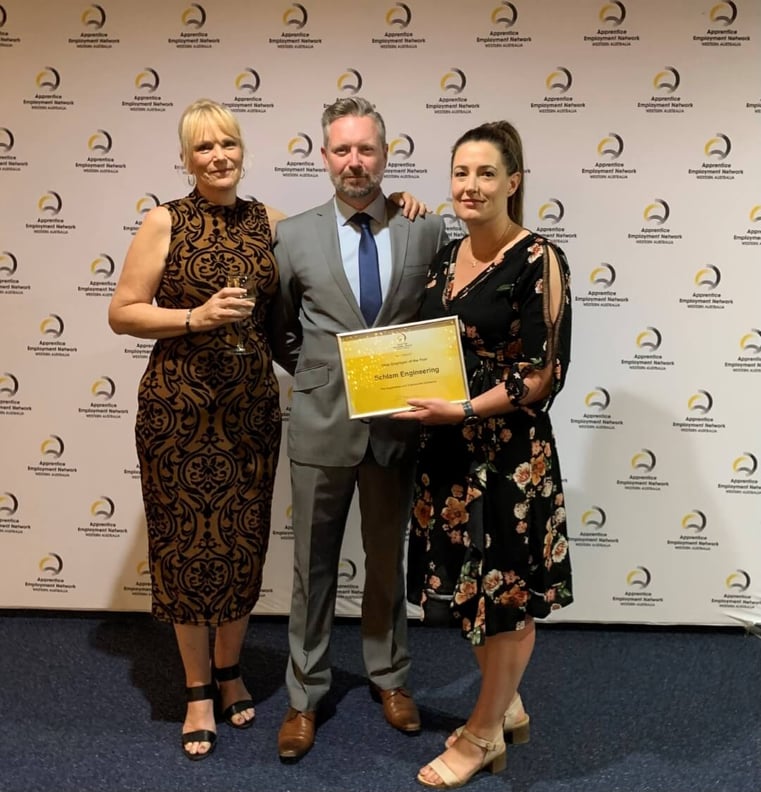 On 12 November, The Apprentice Employment Network WA held its annual Awards of Excellence.

The Awards of Excellence recognise and promote the outstanding achievements of apprentices and trainees employed by our member Group Training Organisations operating in Western Australia and the host employers who support them.

The evening was celebrated by 180 people, consisting of finalists, family and friends, industry representatives, State and Australian Government Members of Parliament and State Government members.

Schlam made it as a finalist in the Host Employer of the Year category for the second year running.

Colleen Bartle, who oversees Schlam’s apprentice and trainee program at the company’s Waroona branch, said it was satisfying to make it a finalist once again. However, the real reward was seeing young people grow into their careers.

“Winning awards is the last thing on our mind when we started the apprentice and trainee program. It’s great to be nominated and recognised by the industry, but the real payoff is seeing young people go through grow and learn in their chosen career,” said Colleen proudly.

To date, over 40 people have been through the program at the Waroona branch, including apprentices and trainees spread across various business departments, including administration, projects, fabrication, and welding.

The training program has since been expanded to include trainees at the Forrestfield headquarters and even FIFO apprentices in mechanical and fabrication trades.

One such person is Jana who recently graduated from her heavy diesel mechanic apprenticeship with flying colours.

According to Jarrod Broughton at the Apprentice and Training Company (ATC), Jana leads the heavy diesel apprentice space.

“There’s a massive demand for FIFO HD fitters right now, and Jana is a perfect example of someone who took the initiative and is now reaping the rewards.

“There’s a wealth of talented young people out there who are keen to get into the heavy diesel side of the mining industry, but places are limited. So, for a company like Schlam to step up and offer placement is good news for the individual and the industry as a whole,” said Jarrod.

Last week, Jess Mills joined our recruitment team and to say that she is excited about it would be an[...]
END_OF_DOCUMENT_TOKEN_TO_BE_REPLACED

OUR PRINCIPLES: WALK IN THEIR SHOES - DIVERSITY AND INCLUSION

We have six guiding principles that define how we need to behave as a business every day to become the business we[...]
END_OF_DOCUMENT_TOKEN_TO_BE_REPLACED

TOWNHALL MEETING: IT'S A GREAT TIME TO WORK AT SCHLAM

In September 2021, Schlam CEO, Matt Thomas, held a series of Townhall presentations at the company's locations in[...]
END_OF_DOCUMENT_TOKEN_TO_BE_REPLACED

A long-term client of Schlam’s recently changed their mine plan.
END_OF_DOCUMENT_TOKEN_TO_BE_REPLACED

Dawson Mine is an open-cut metallurgical coal mine operation made up of three operating pits – North, Central and South. It commenced operations in 1961 and is one of the oldest coal mining operations in.
END_OF_DOCUMENT_TOKEN_TO_BE_REPLACED

The breadth of services offered by Schlam ensures that we are able to satisfy all major mobile plant shut downs.
END_OF_DOCUMENT_TOKEN_TO_BE_REPLACED