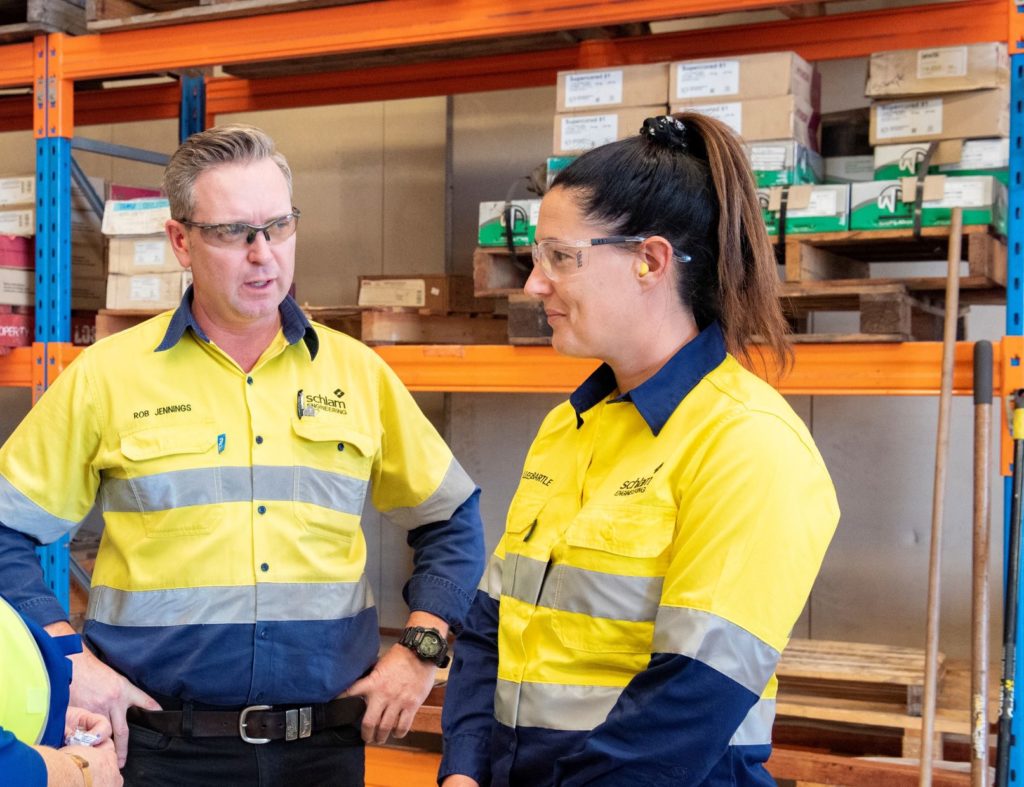 Originally named Drakesbrook, the town of Waroona was founded in 1891. Its name today is thought to be a reference to the town of Werroona – meaning “resting place” in the Djadja Wurrung Aboriginal language – near the Bendigo goldfields in Victoria.

One person who certainly hasn’t spent much time resting in Waroona is Colleen Bartle, who started working at Schlam close to nine years ago.

Colleen grew up in Dwellingup and moved to Waroona 15 years ago, where she secured a job working in human resources for Schlam.

“As I live locally, the job has been a great fit,” said Colleen.

“I first started as an HR officer and progressed to handling all the recruitment and human resources functions for the company.”

While Colleen loved the work she was doing, the role was handed over the Perth office to cover the job while she was on maternity leave.

Colleen has since become a mum twice and has transitioned into project coordination.

“It was a bit of a culture shock for me. I went from dealing with people to dealing with things,” said Colleen.

“It’s only been six months or so, but I’m adapting. I’m more of an on-the-job learner and prefer to get chucked in the deep end. Another team member helped to show me the ropes before she went to maternity leave herself, which certainly gave me a head start.”

She notes that the tight-knit group in Waroona has helped her get up to speed fast saying that they’re a great team.

“We know each other’s strengths and know that we can lean on them when we need support or guidance,” said Colleen.

What sets Schlam in Waroona apart in many ways is the focus on hiring locally and training young people. Colleen is proud of her involvement in Schlam’s dedicated apprenticeship program, which employs and trains local youth and ensures an experienced workforce for the future.

“Support from the town is growing. People might not know that we don’t just work on mining equipment, but also handle smaller jobs working on agricultural equipment,” says Colleen.

Colleen believes that by investing in people and the community that companies can expect more loyalty and so far, it’s paying dividends for Schlam in Waroona.

The Hunter Region, also commonly known as the Hunter Valley, is a region of New South Wales, Australia, extending[...]
END_OF_DOCUMENT_TOKEN_TO_BE_REPLACED

In January 2021, Schlam CEO, Matt Thomas, held a series of Townhall presentations at the company's locations in[...]
END_OF_DOCUMENT_TOKEN_TO_BE_REPLACED

The path less travelled can sometimes lead to the most rewarding destinations. In the workplace, the path for some[...]
END_OF_DOCUMENT_TOKEN_TO_BE_REPLACED

The breadth of services offered by Schlam ensures that we are able to satisfy all major mobile plant shut downs.
END_OF_DOCUMENT_TOKEN_TO_BE_REPLACED

Our sophisticated design capabilities enable us to offer clients completely customised solutions to the most complex issues.
END_OF_DOCUMENT_TOKEN_TO_BE_REPLACED

The breadth of services offered by Schlam ensures that we are able to satisfy all fabrication and wear management services.
END_OF_DOCUMENT_TOKEN_TO_BE_REPLACED