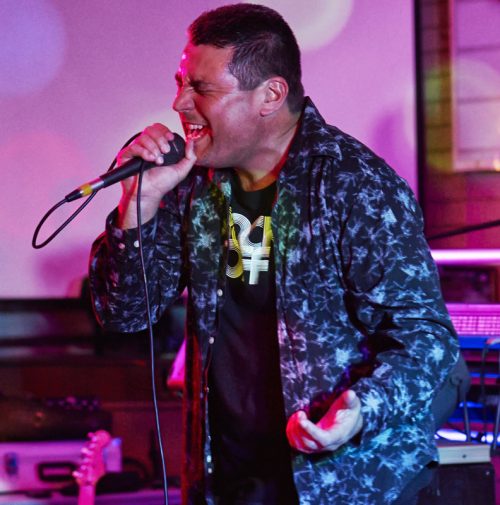 The use of stereotypes is a significant way in which we simplify our social world; since they reduce the amount of thinking we must do when we meet a new person.

While that sounds all well and good, stereotypes are inherently flawed because they don’t take into account that we are all individuals, even if we have common traits.

Accounting, for example, is one of the most stereotyped professions out there. However, as a musician and avid sportsman, Schlam’s Edward Daquino blows that myth out the water.

“I started in a covers band back in Sydney.

The band was called Australian Made as we played all the big Aussie hits. We’d play in the city and tour as far north as Brisbane and then into some of the smaller country towns in Queensland and New South Wales,” said Ed.

At that stage, he was playing three to four times per week, while still studying and working full time. To further complicate his diary, he also had a newborn at home.

Ed or Eddie D as he goes by when on stage has played bass, guitar and also been the frontman in other bands since then including Hits Unlimited, 4 Floors and Women of Rock, a tribute to the best female-fronted groups around.

Much in the same way that a band breaks up and then gets back together for a reunion, Ed’s history with Schlam is broken into two chapters.

“I first started with working with DT Hiload in April 2010. It was the start of the boom when Bandrill still owned it. It wasn’t long after I began that Ausdril bought the company out.

“The four years between 2010 and 2014 were great for the company. But then the mining slowdown happened, and orders stopped flowing. It was like falling off a cliff,” remembers Ed.

The company went from a manufacturing a record 132 dump bodies in a year to just 30.

According to Ed, Ausdril got nervous, and the company began turning liabilities into cash. One hundred fifty employees lost their jobs, and Ed was the last to go.

“It was a sad time. I’d been with the company for six years, and it had become a big part of my life. I had to say goodbye to many great friends,” he said.

Lucky for Ed, Ryan Schlam stepped in and got the band back together.

“There was about an 18-month gap between drinks, but it was great to see them all again. We’ve slowly brought many of our previous employees back on board, and it’s rewarding to be working with them once again.

“The evolution has been incredible,” he said.

Aside from a few fun performances such as those for his local cricket club, Ed says that he officially hung up the microphone at the end of last year, performing his last paid gig on New Year’s Eve.

When quizzed if he’d do it all over again, Ed is quick to say no.

“Nah. I’d become a professional cricketer if I could roll the dice again,” with a smile.

Well and truly blowing the accountant stereotype out of the water.

The Hunter Region, also commonly known as the Hunter Valley, is a region of New South Wales, Australia, extending[...]
END_OF_DOCUMENT_TOKEN_TO_BE_REPLACED

In January 2021, Schlam CEO, Matt Thomas, held a series of Townhall presentations at the company's locations in[...]
END_OF_DOCUMENT_TOKEN_TO_BE_REPLACED

The path less travelled can sometimes lead to the most rewarding destinations. In the workplace, the path for some[...]
END_OF_DOCUMENT_TOKEN_TO_BE_REPLACED

The breadth of services offered by Schlam ensures that we are able to satisfy all major mobile plant shut downs.
END_OF_DOCUMENT_TOKEN_TO_BE_REPLACED

Our sophisticated design capabilities enable us to offer clients completely customised solutions to the most complex issues.
END_OF_DOCUMENT_TOKEN_TO_BE_REPLACED

The breadth of services offered by Schlam ensures that we are able to satisfy all fabrication and wear management services.
END_OF_DOCUMENT_TOKEN_TO_BE_REPLACED